We are planning a second and last litter for Lana.

If all goes as planned the planning will take place in Winter 2016. At this moment we are in search of her Mister Right!

If you are interest in a puppy from Lana or just want more information don’t hestitate to contact me. 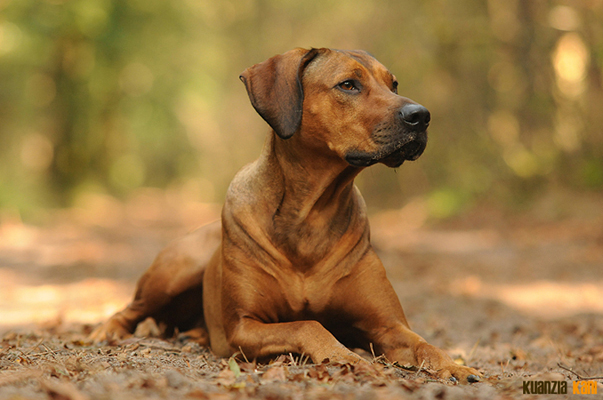 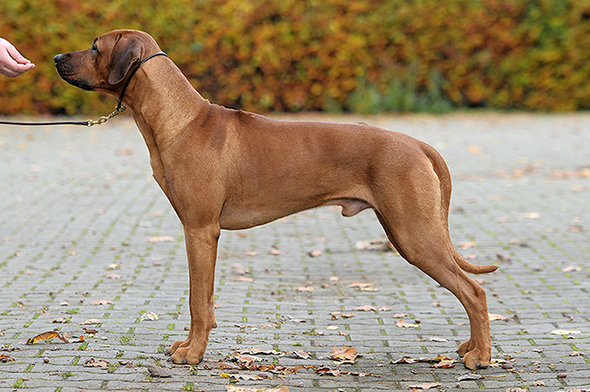 Road trip !! This time a short one to Hanover 🙂
Me and Esther together with Amon, Daka and Azuma spend the night in Hanover to enter the CACIB show the next day.

Amon entered in Intermediate class and gained 3rd place Excellent. I also showed Azuma and she gained 1 Excellent in Veteran Class. Always a pleasure to show her ! 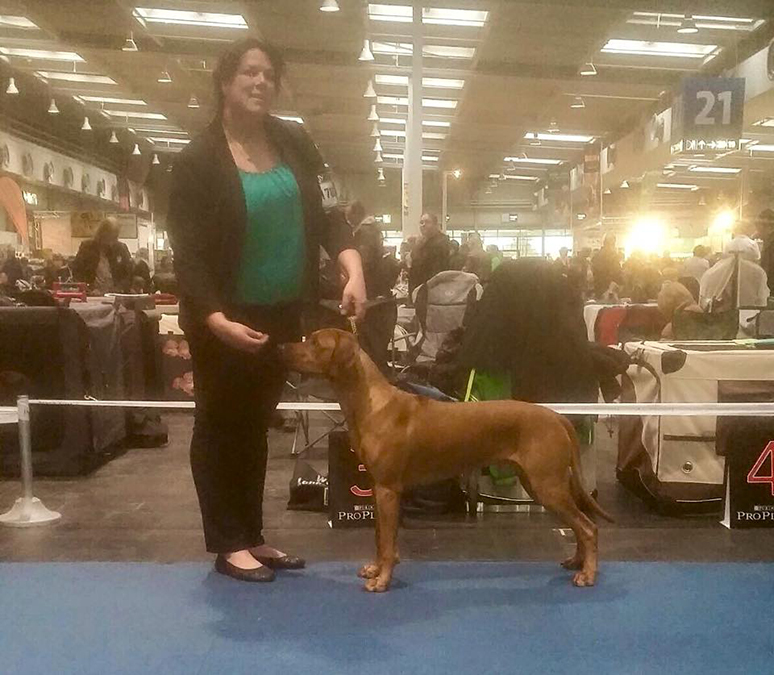 …Darel
we have had a few nerve wrecking weeks, but we finally got the green light today.
Darell is fine ! He has had a weird cough for a while and when this increased we had him checked by the vet.
X-rays, ultrasounds of abdomen and heart showed no problems. X-rays of his lungs looked like there could be something.

After weeks of medication he now seems fine again. X-rays looked better ! So he is in the clear (for now) ! 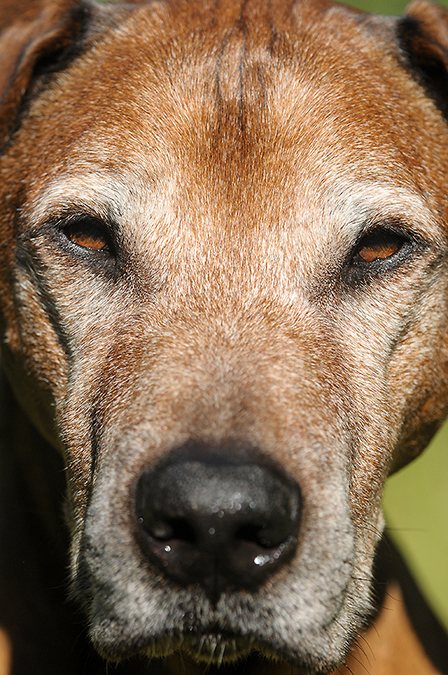 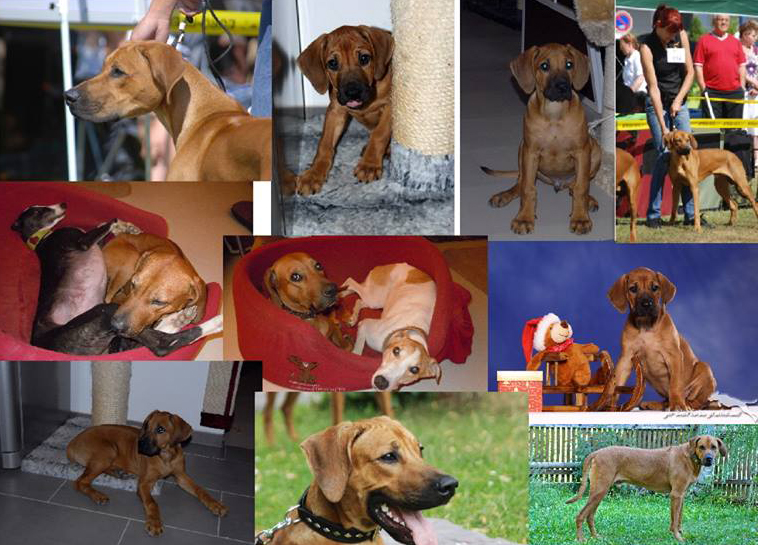 Wonderful walk. Darell, Lana with half brother Duncan and her 3 sons Dynno, Ramses and Amon. Perfect weather, perfect walk.
All dogs got along great. The 3 brothers are very much a like but at the same time not at all, haha 🙂 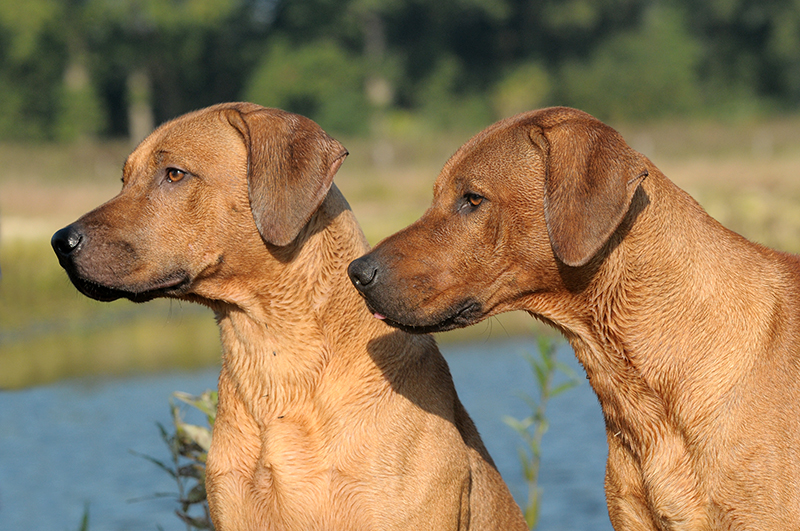 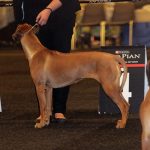 Another show , this time in Zwolle close to home 🙂
Amon entered Intermediate class and gained 1 Excellent ! 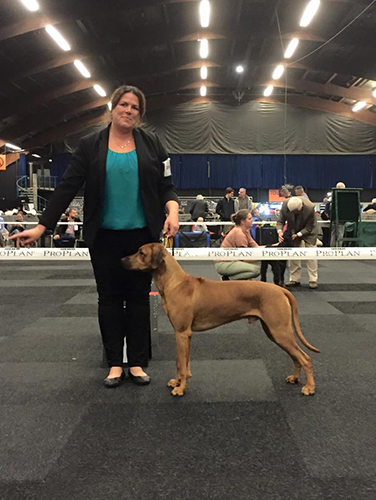 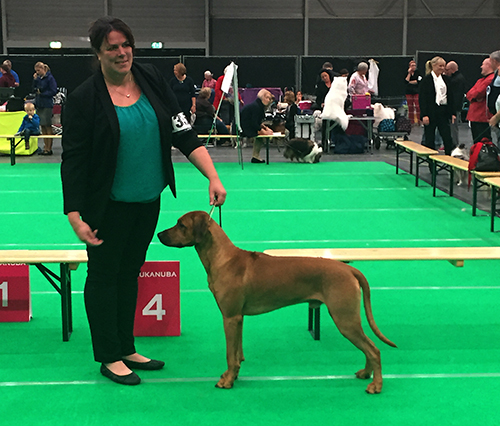 What a day at International Dog Show Maastricht NL.
Amon entered intermediate class and won ! In competition for Best Male Amon won too and was awared with CAC and CACIB! A kick off to another title!
Thank you to judge Ms. Horsten Ceuterman for awarding Amon with this result! 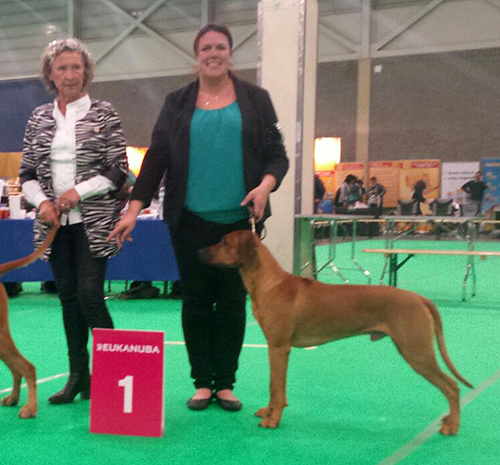 Rhodesian Ridgeback Club Nederland clubshow.
Entered were Jali, Ayla, Ayize and Amon.
Jali entered in Intermediate and gained Excellent, Ayla entered breeders class and was awarded Excellent. Ayize entered Intermediate class and gained Very Good and Amon entered breeders class and was awarded Excellent, short cut to the last 5 but the line up were 4 bigger dogs and then Amon 😉 He could not compete with the big boys 😉 But nevertheless happy with the result! 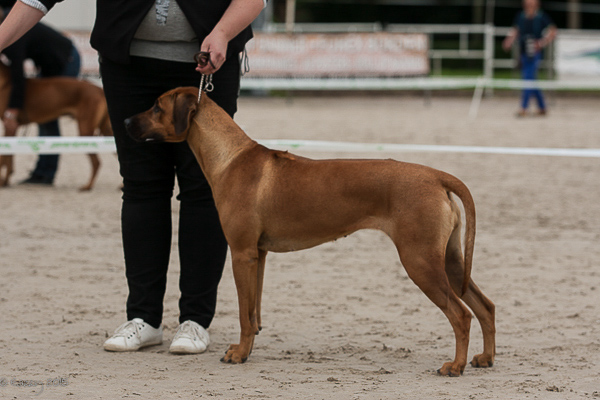 Some new photos of Amon

After weeks of waiting after the x-rays were taken we finally received the last results today for Amon.

So happy with all the results !

* officialy examend in Finland by A. Lappalainen

International dogs show Luxembourg, many hours on the road, little sleep, good company and nice atmosphere.
Amon gained Excellent in Intermediate class, no placement.
Meeting Elena and Willy again after 1,5 year was wonderful, showing them Amon and them getting to meet him in person as a “grown” dog too! 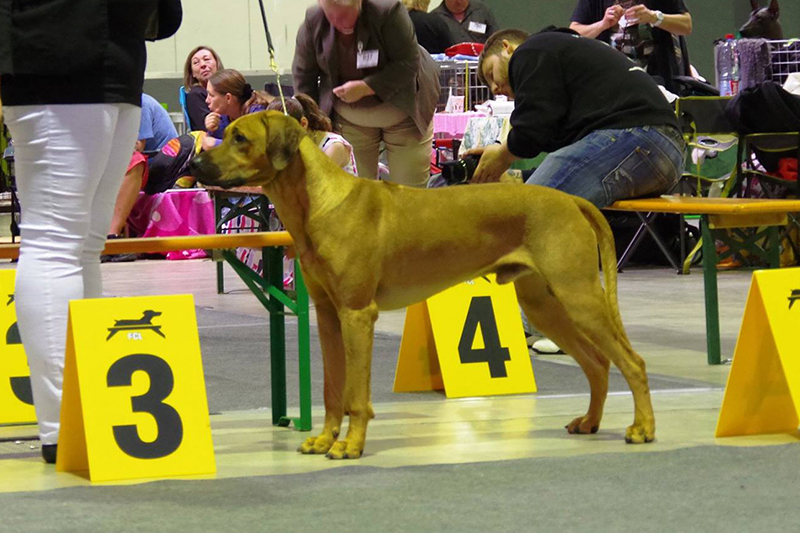 Some new photos of Amon

Amon his last 2 chances to gain the title of Junior Champion.
On Saturday Amon gained 3 Excellent in Junior Class. Wonderful report from judge Mr. Ritter (FR)
On Sunday Amon again did his very best, we had a nice big ring so we could show movement as we should be able to.
Judge was Mr. J. Sloot (NL) and he placed Amon 1 Excellent !
With this result he fullfilled the condition for DUTCH JUNIOR CHAMPION 2015 !!! 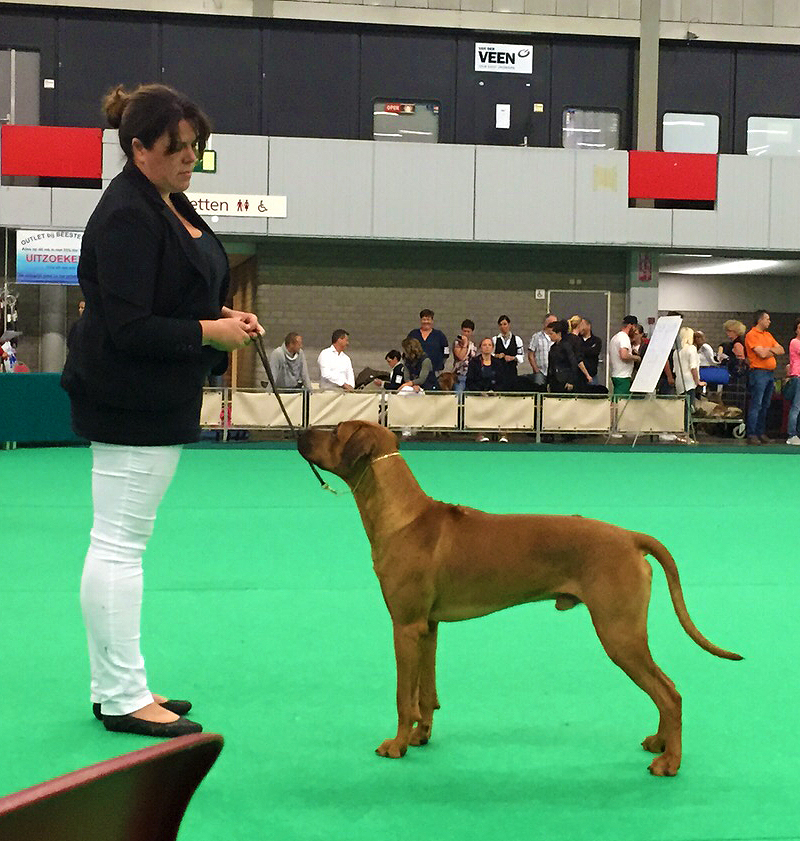 Amon 17 months old now, so time for some new photo’s 🙂

Today at an all breed club show Amon was 1 Excellent in his class and Best Male. Lana entered too and was 3 excellent! Breed entry 16.
Completely exhausted after an amazingly fun weekend, lots of laughter, fun, food and drinks (many!) and little sleep ! 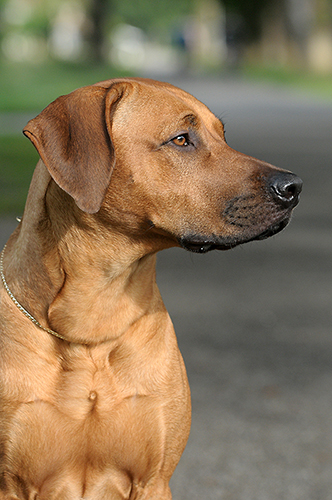 ..our way to a Champion title 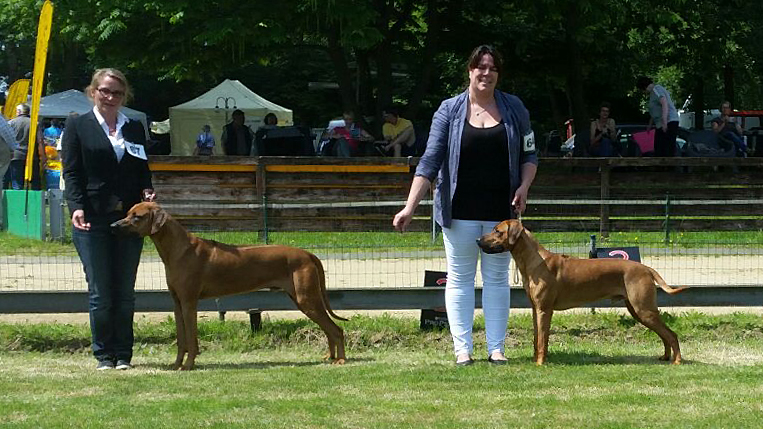 Day 1 this weekend from showing in Munster. Amon entered intermediate class for the 1st time and we had hoped for “better” result.
Amon rocked the ring, stood like a pro, moved wonderful and the judge commented on the report: Powerful male with very masculin head, good topline, Very good angulation front and rear, spacious ground covering gait.

Amon was placed 3rd Very Good, with the comment of the judge that he didn’t move well enough…. Left me a bit confused as I heard the judge read the report 🙂 Well maybe he was confused too 😉 We had a fun day, another day tomorrow. 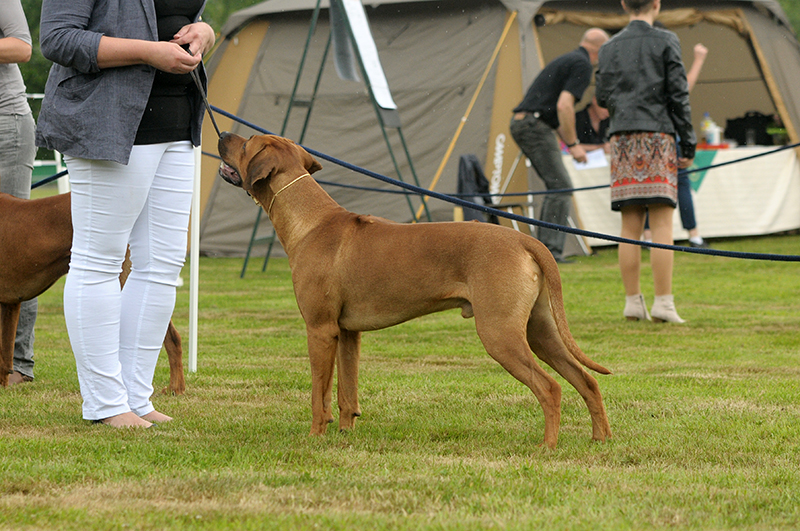 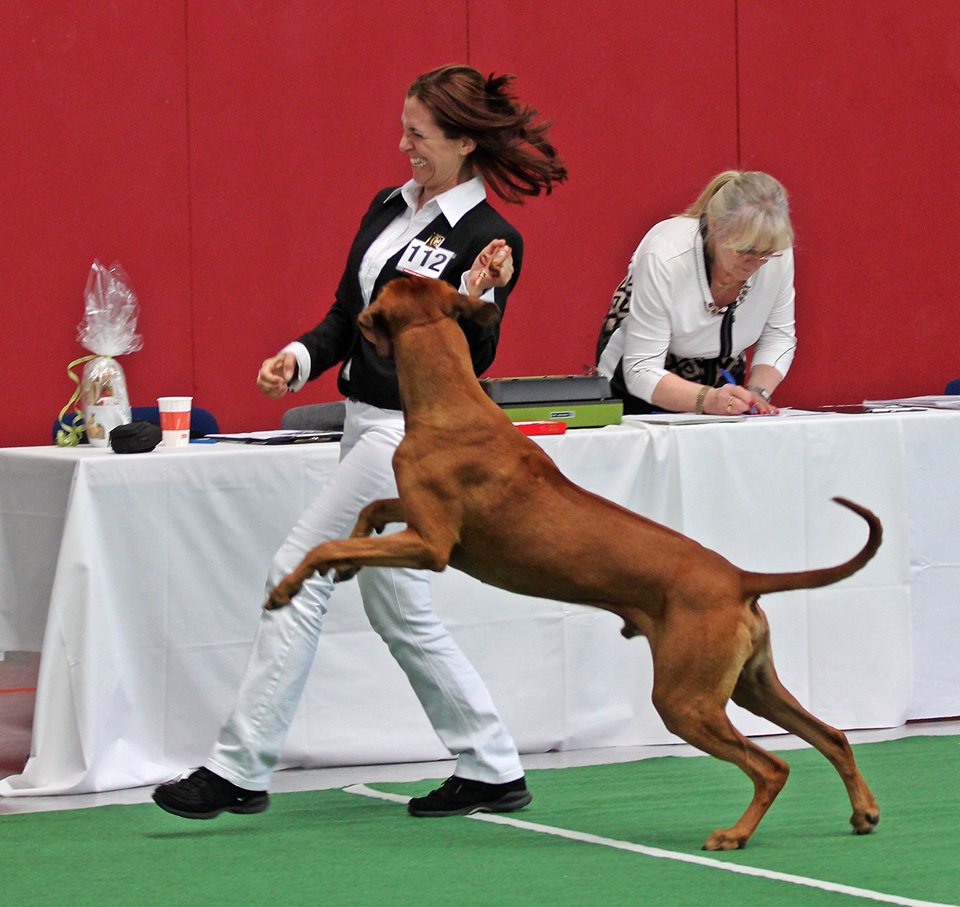 Another coursing day organised by RRCN, this time close to home in Rijssen.

Amon had to start in the adult class as he is 15 months already so had to compete against MANY other and older dogs.
He knew what was coming and I could hardly hold him at the start. Like an arrow he went and had so much fun again!

At the end of the day I was so surprised to hear Amon’s name called as the winner of the adult males 🙂
And to top it of he was also fastest dog of the day 🙂 Thank you RRCN for another wonderful day, thank you Hondencompleet for the wonderful present and thank you Joyce (Kynocompleet) for the massage Amon got before his 2nd run ! 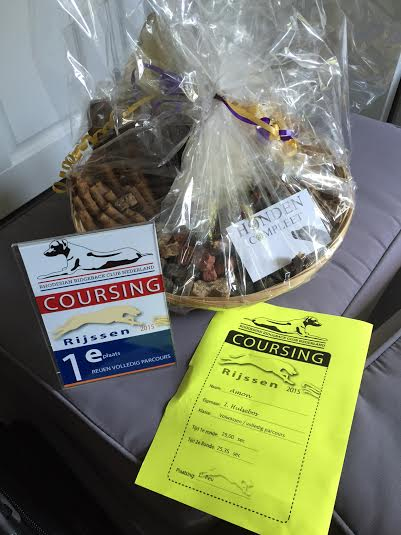 My first Ridgeback, my ever naughty dog 🙂
His big dark head is slowly turning grey, or should I say white, but he is still going strong and enjoying every day to the fullest.
Sweet Darell, on to MANY, MANY more years xx 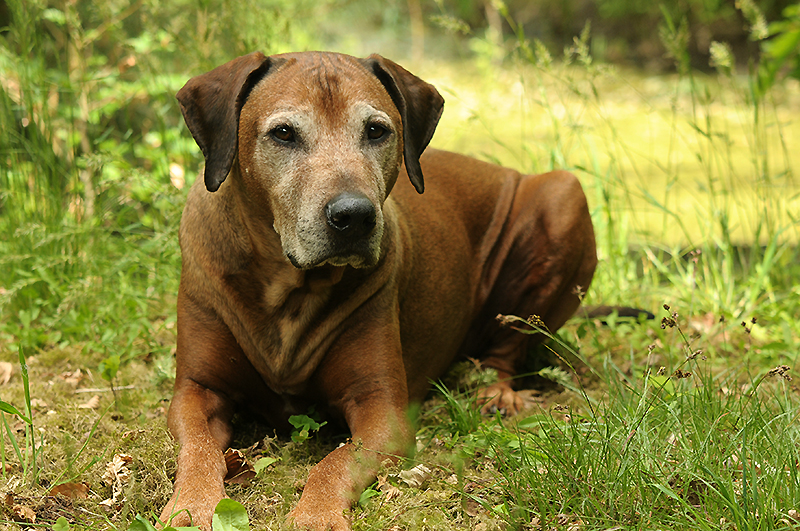 Also today Amon was entered at CACIB Arnhem, he entered Junior Class and gained 3 excellent (from 11).
Super result for my little man! 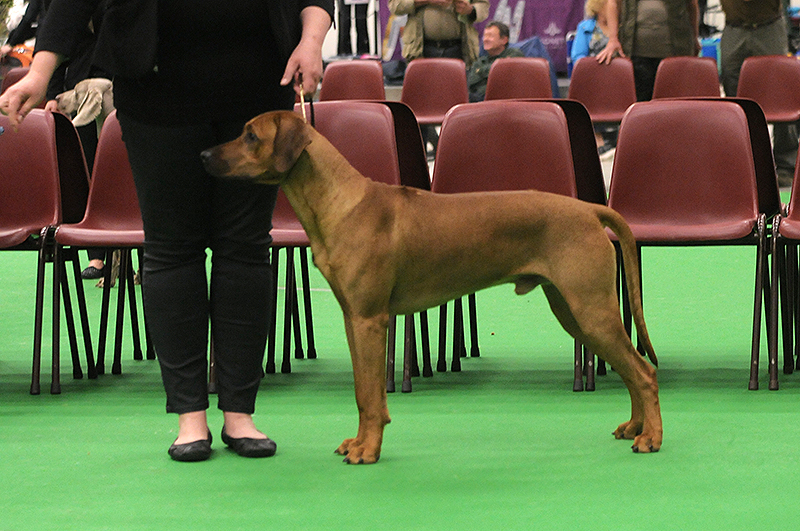 Amon entered the class for 12 until 15 months and gained a wonderful 2nd place with a super time !
So much fun for the dogs ! Amon truly enjoyed it so much. The first run was good, the 2nd run he knew what was coming and as even better! 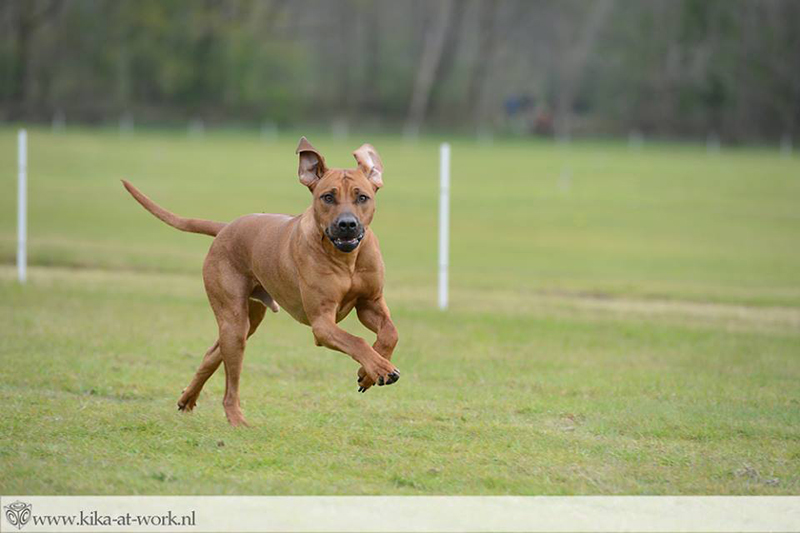 This time Amon was entered to the Braboshow in Antwerp.

Susan came to join me on the show as my regular “show-buddies” couldn’t be there.
Amon was entered in Junior class and gained 1 Excellent (1/4) giving him the Crufst Qualification we were after!

With this result he can gain his 2nd title to his name : Brabo Junior Winner 2015

Yearly offspring day from the Rhodesian Ridgeback Club Nederland, after being there with Kani a few times after he sired a litter and years of helping, it was my turn to be proud and show my own puppies!!

All 10 puppies were present !! A BIG thank you for all the owners who were there with their pup! So happy to have all of them together.

The pups all got wonderful reports from the judge. All were behaving like they should, happy, tail wagging and jumping instead of running 😉

I couldn’t be more proud, they have turned out just like I had in mind when I planned the litter. Judge came to me to compliment me on their behavior and character and THAT is what is the most important to me !

Some photo’s from that day can be found here 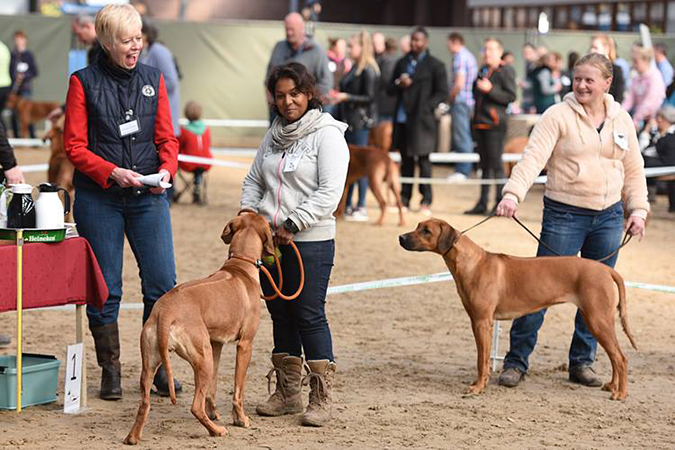 April 9th, what used to be a happy date has forever turned into a sad date.
Today Kani would have turned 9 years, unfortunately he is already over the Rainbow Bridge.

Almost a year ago we removed an Insulinoma on his pancreas. For a long time Kanyo has done really well. But in the past few weeks we had signs and indications that the tumor had returned. This time the tumor was located on the worst possible place, Kanyo didn’t make it through surgery despite all the efforts that were made.

Run free beautiful boy, no more weakness in your body, just forever able to run as much as you want.
I hope Kani was there waiting for you and that you are together again. We will miss you so much, so much…

Show weekend in Holland, Esther, Joke and me entered 3 dogs to CACIB Goes on both days.
Amon was entered in Junior Class, on saturday he gained 3 Excellent with a super report from the judge!

On Sunday he gained 1 Excellent, his 2nd placement for Dutch Junior Champion, only 1 more to go!
He was also chosen as 2nd Best Male, giving him the full CAC for Dutch Champion as Best Male already is Dutch Champion ! 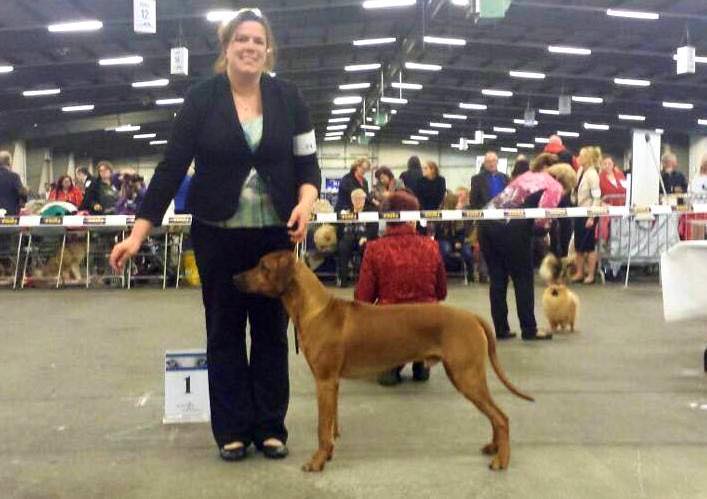 Puppy meeting with 8 from 10 puppies. Wonderful day, with wonderful people, wonderful dogs. Laughter food and drinks and so much fun for the dogs!
Extremely proud of our A-babies, all have excellent open characters, curious and happy and not afraid of anything 😉

Some new photos from all puppies who were present !

Together with Joke and Edjin, me and Amon drove to Alpen in Germany to enter the Landessiegerschau West from RRCD.
Amon entered Junior Class and won, giving him JCAC RRCD and JCAC VDH. Later he won Best Junior giving him his first title: Landesjugendsieger West ! In competition for Best Male Amon WON !!! Just 12 months old winning his first Best Male placement, I am so proud ! 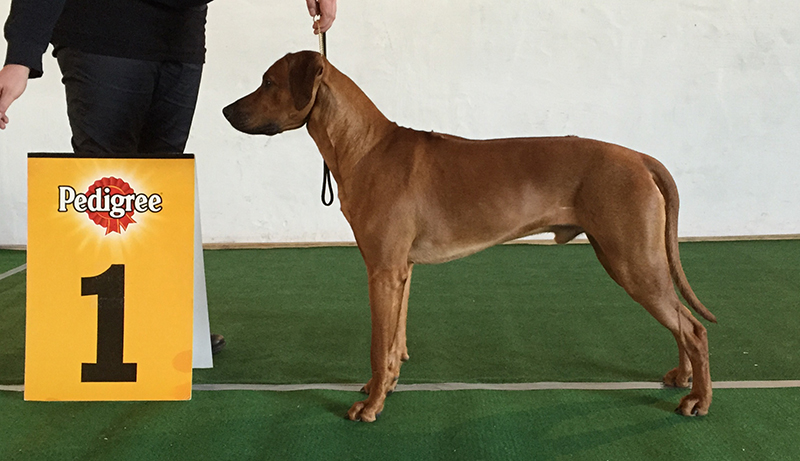 Today is the day I had to say goodbye to my best friend, my defender, my precious my soul….

After 3 intense weeks Kani decided that it was time for him to go. He was diagnosed with a carcinoma in his rectum 3 weeks ago. From that day we even more intensely lived our lives together. Until the last few hours Kani has been a strong and brave dog.
He was asking me to let him go and so I did.. Breaking my heart and him taking a big piece of my heart with him.
Until we meet again..

Lana after a looooong time entered also and she gained 3rd Excellent !

Starting the new year with a new stacked photo of Amon, 11 months and still developing nicely 🙂 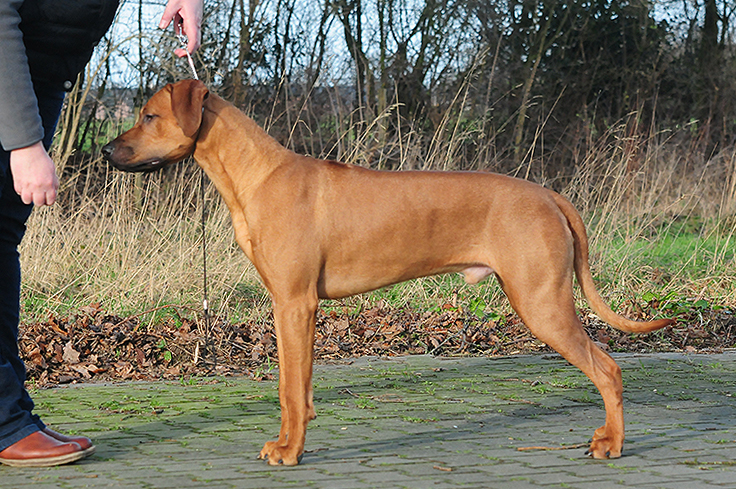